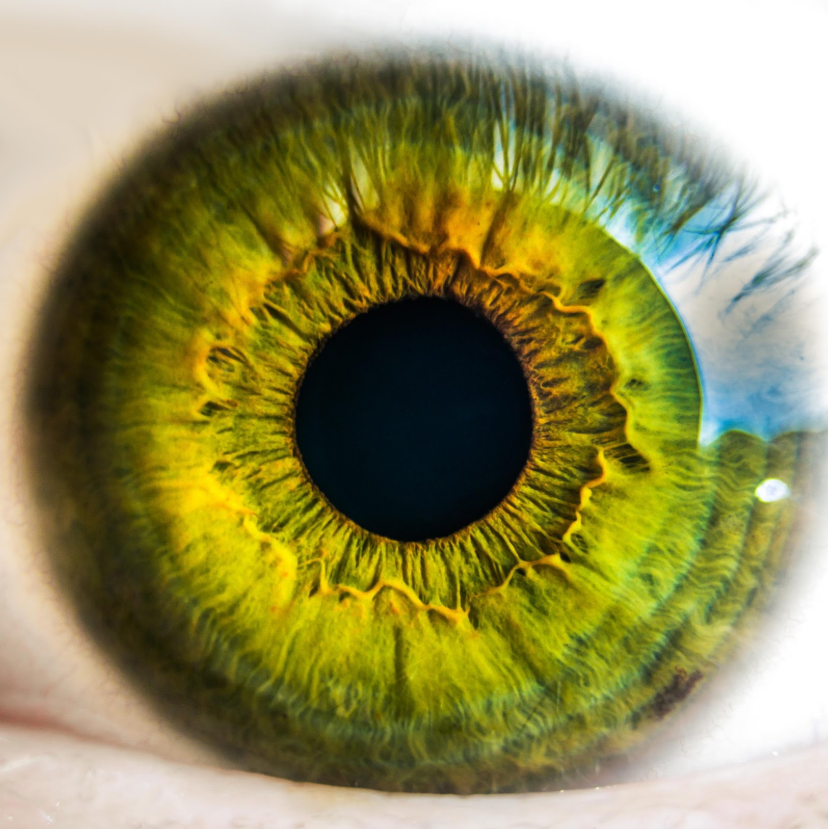 Visualize this… (ruminations on how we see) 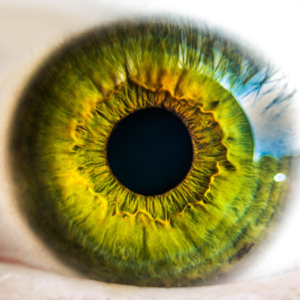 I was surprised when I found out I don’t live in real time. Nobody does, which is slightly creepy. Here’s what I’ve learned…

Though anyone would swear that what they see is one complete picture, in fact, it isn’t at all. The central area of your retina, called the fovea – is where you actually capture what you’re focusing on. But it’s only about the width of the full moon, or about 5 degrees out of your total 120 degree view. That’s pretty small. And it’s where your visual acuity is greatest, often better than 20/20. You do pick up information beyond the fovea, but visual acuity rapidly falls off.

So imagine this: your eyes dart all over your field of view, up to 100 times per second! and in no particular order, capturing these little oval areas, which are then transmitted to the cerebral cortex of the brain. There they are added to a quilt of other ovals you’ve captured earlier. In this way, a “complete” picture of what’s in front of you is stitched together.

But each of these little ovals of information only last a few seconds, then that information degrades. So your eyes have to continue capturing new data, and sending it to the brain to build the picture. What if you had to watch a movie like that? It would drive you nuts.

And I have a great experiment – focus on an object as intensely as you can, without letting your gaze move away from it. Don’t blink, don’t move. What happens? Everything outside of a small area in the middle of your view will start to darken, and completely lose information. Voila: you have located your foveal region.

The upshot is, you never see a complete image of anything in real time, because parts of that image are being added or degraded all that time. And that means your reactions are also delayed, because the information you’re acting on already happened, milliseconds ago. The oft-quoted term of “being in the moment” – at least in the visual sense, is a therefore a myth.

Couple that with the fact that often you don’t capture ALL the areas in your field of view, so your brain fills in the blank spots, making assumptions about what it thinks should be there. It’s basically lying to you, which helps to explain why sometimes people think they’ve seen wildly varying things. If they didn’t both capture the SAME foveal areas at the same time (the likelihood of which would be astronomically highly), then the possibility that their brains might fill in blank places differently is also very high.

But you can speed up your processing time. I started riding motorcycles about ten years ago, and at first was extremely timid about it. A friend told me I had to go to the local track to learn how to ride better. I thought he was insane. But I did it, and what I learned was fascinating.

Each time I spent a day at the track, I realized that my reactions times decreased proportionally to the amount of time I practiced at speed. And after each day spent doing that, the following day it seemed as though street traffic was much slower. And that was because my reaction time was that much faster. So it follows that processing speed can be altered with practice, in just about any situation.

And as if that weren’t strange enough, peoples’ color perceptions can also be quite variable. Everyone is born with slightly different numbers of rods, which detect luminance, and red, green and blue cones, which detect color. Is the blue I see the same as the blue you see? Some people have additional types of cones. Whoa. And how could they possibly describe what additional colors they see?

Most people have many less blue cones (2%) than red (64%) or green (32%), and almost none of those are located in the foveal area, which explains why it’s almost impossible to really focus on a solid blue light for very long. Those blue cones, though, are extremely sensitive, and there must be some boosting mechanism of the signal.

Ever notice how, at dusk, things start to lose color, and the world becomes varying shades of gray? Notice your surroundings before the sun goes down, and how colors start to fade as less and less light is available. Eventually, before all light is gone, everything will have become shades of gray. Cones are very good at picking up color and detail, but they need a lot of light to do it.

However, your rods (the ones that detect the amount of light, not its color) are still working. That’s why you can still see things at night. They’re incredibly sensitive. The rods’ photoreceptors (called rhodopsin) can detect a single photon, and will transmit a chemical signal along the optic nerve to the brain.

While there are rods in the central part of your vision, most of them are located outside of the fovea, in the peripheral zone, which is everywhere else but the center. That may be one reason why we can drive cars and not crash into each other all the time. Peripheral vision alerts you to motion. That information heads directly to your flight or fight centers in the brain, and you make snap decisions to get out of the way. Sometimes.

Sometimes people lock onto an object in their foveal field (called target fixation in the motorcycle world, and it’s a real thing, been there…) and they don’t register what’s going on peripherally. In fact, there have been a number of studies on target fixation or the “moth effect” where people simply cannot look away.

If you’ve ever started to faint, you’ll know that phenomenon called “tunnel vision”, where your only window on the world is a rapidly shrinking pinhole in the center, with nothing but black all around. That’s a golden opportunity to find out just how small your foveal area really is.

So. There’s a lot to this. I know very little about this field, but what I have learned is so fascinating, I have to share it. And this is only the tip of the visual iceberg – anyone intrigued by this should read more about it, because the more you uncover, the more astonished you’ll be.

Here’re the Cliff notes on vision: the image picked up by the eye gets flipped upside down as it passes through the lens, and then shines on the foveal area on your retina. There, rhodopsin molecules detect those photons and convert them to chemical signals (11 cis-retinol to trans-retinol). Those get routed through a very weird cross-over section within the brain called the optic chiasm – signals from the right side of both eyes are sent to the left side of the brain, and vice versa. At some point those signals also go through the thalamus, which acts like a gatekeeper, controlling the flow of chemical information, (leading me to think that there must be a cap on the amount of data your brain can process at any one time). The signal finally joins a ever-refreshing tapestry of signals in the cerebral cortex, which tags in four dimensions the location, size, color, texture and movement of everything in view.

All this to say – the fact that there are so many variables in our visual equipment, and how fast or accurately our brains interpret what that equipment sees, leads me to wonder how we ever agree on anything. Everyone is getting a slightly different spin on life.

Yet we do, more often than not, and that’s amazing. And when you throw things like cultural differences in how people respond to color and content, it’s beyond amazing that there is as much agreement as there is. Maybe some things are truly universal.